Out 29th April, the record comes on the heels of an extremely exciting 2021 for the band, which saw them play to sold-out crowds at the Roundhouse twice in two weeks - both on tour with Squarepusher and at Pitchfork Festival London - as well as selling out their own headline date at Peckham Audio, and releasing two widely acclaimed EPs titled “FLOOD” and “FLOOD Remixed”, the latter of which featured treatments from producers Hodge, Azu Tiwaline, object blue, AQXDM and Laurel Halo, and Scottish instrumental rock legends Mogwai.

The news of the album is accompanied by a new single titled “Flashforward”, a slow-burning beauty made-up of atmospheric vocalisations, churning riffs, and propulsive, motorik basslines. The track also comes with a new video from visual designer and long-term collaborator Jason Baker.

As SCALPING’s sound becomes more adventurous, so has their aesthetic, the technically impressive animation uses richly coloured and textured sequences to compliment the bands darker narratives: of paranoia and surrender, with cinematic elements of science fiction, body horror and technology’s dominance over man.

This February, “Void” will be put to the test, as the band kicks off an eight-date UK headline tour, culminating in a live performance at fabric on May 5th. As live shows return in 2022, SCALPING will continue to prove themselves as one of the UK’s most impressive, ambitious, and original new live bands. They will play the following dates:

‍
Based in Bristol, UK, SCALPING are a four-piece band: Isaac Jones on drums, James Rushforth on bass guitar, Nick Berthoud on guitar and Alex Hill on electronics. For the last five years, SCALPING have been writing, recording and performing music together, trying to answer the question that guides their work; “How can a band bridge the gap between live guitar music and live electronic music?”

Starting in 2017, the band played live as a three-piece for two years, almost exclusively in Bristol, before releasing any music. Through their time in other bands, they hooked up with promoters they trusted and focused on doing fewer shows with better results. After a couple of years, Nick Berthoud was brought in, on guitar; a “fan first, member second” who was impressed by the developing live show and attuned to their conceptual frustration.

On “Void”, SCALPING are heavy metal in 4D; the sound is moody, distorted and rhythmic, but the use of electronic techniques gives the finer details room to breathe. Their early lust for “all loudness, no nuance” has cooled, too, making more space for experimentation. Tracks such as “Tether”, featuring Oakland rapper DÆMON, puts a modern, metal twist on Bristolian trip-hop, whereas album closer “Remain in Statis” features fast-rising artist Grove, a Bristol-based rapper and self-professed metalhead whose commanding presence sets the track alight. These songs also mark an additional new chapter for the band with the addition of vocals for the first time.

Set for release on 29th April on white vinyl with an A1 poster, CD, cassette or digital – as well as heaps of great merch. Order here
‍ 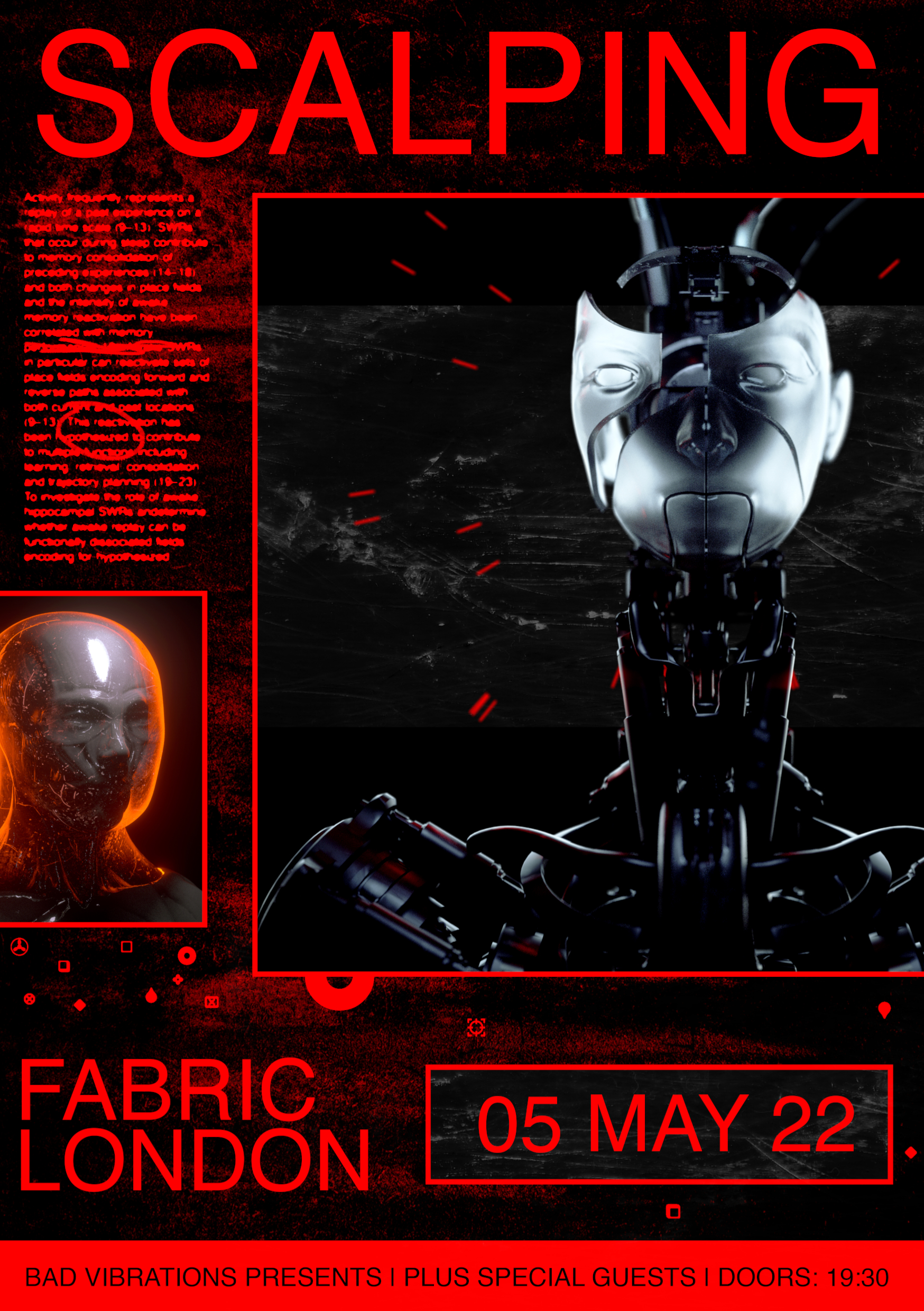